The iconic Jaipur Literature Festival, held annually at the Pink City of Jaipur, Rajasthan, has always believed in the spirit of community and the hope, strength, and vitality literature gives. As we distance ourselves from each other physically, Teamwork Arts, the producer of the Jaipur Literature Festival, goes on curating international editions of JLF, which traditionally infuse the multilingual literary heritage of South Asia with the distinct flavor of the host regions, in the digital space with a diverse and engaged community of book-lovers. JLF Houston is scheduled to take place on October 16-17 and is presented in association with the Consulate General of India, Asia Society Texas Center, and Inprint.

Registration is free and open to the public. To join any of the sessions, register here.  To see the schedule for Day 1, click here. 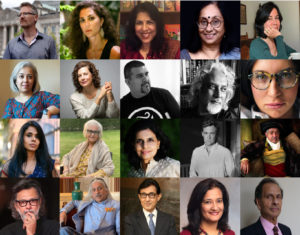 Celebrated producer and director Rakeysh Omprakash Mehra’s memoir, The Stranger in the Mirror, co-written with Reeta Ramamurthy Gupta, follows the journey of a master storyteller and his work around some of the most successful movies of Bollywood such as Rang De Basanti, Delhi-6, and Bhaag Milkha Bhaag. Peppered with anecdotes from Mehra’s life, the text shifts between multiple narrators giving us a unique perspective into his creative genius. In a session of memory, creativity, and reminiscence, Mehra ​speaks​​ to Sanjoy K. Roy.

Hyphenations assume a heavy history and unique role in diaspora writing, binding Indian origin with Trans-Indian experiences. Vinod Busjeet’s literary debut, Silent Winds, Dry Seas, began as a memoir, now a provocative novel about indentured Indian communities in midcentury Mauritius. Jenny Bhatt is a writer, translator, and critic whose debut short story collection, Each of Us Killers, depicts the lives of the Indian diaspora and the socio-cultural boundaries which frame them. In conversation with critic and writer Parul Kapur Hinzen, they discuss the ways in which they uphold, amalgamate, and recreate their identity, and yet remain rooted in their concept of ‘home’.

A long time ago, in the ancient lands of India, known in those days as Bharatvarsha, a family quarrel grew into a bloody war. There had been wars before, and there have been wars since, but that mighty battle between warring cousins of the Kuru clan has become a part of the essence of India. The Mahabharata is one of the two major Sanskrit epics of ancient India. A powerful session that pays tribute to the women of the Mahabharata, as they argue, plead, reason, and rise from the embers of the grand epic that often focuses only on heroic men. Three masters of the narrative craft speak to Sunit Tandon about the many variations of this foundational text, the role of women within it and their vivid and resonating voices.

Michael Madhushudhan Dutta led an extraordinary life, rebelling against the status quo, believing that the world was his for the taking; not wanting to be held back by convention or where he was from. Grappling with many of the issues we are facing today, he deeply believed in his ability to transcend his beginnings, confident that his voice could traverse linguistic and cultural boundaries to achieve literary greatness internationally. He ultimately was able to imbibe influences from elsewhere into the very core of Bangla literature. Exploring his international sensibilities, along with his intense, deep-rooted engagement with Bangla, the panel looks forward to celebrating the genius of MMD, along with exploring questions of identity, linguistic nationalism, and innovation.

Lisa Taddeo’s debut novel, Animal, is a tale of trauma and revenge, viscerally taking us through the protagonist’s attempts to understand her present while coping with the abuse of her past. In conversation with writer Meena Kandasamy, Lisa discusses the challenges of a male dominated society and the precarious intertwining of violence and memory.