EVENT DETAILS: Anthony Doerr will give a brief reading from his new novel Cloud Cuckoo Land, followed by a conversation with Maggie Galehouse, a writer and editor in Houston and former book editor at the Houston Chronicle. For information on season subscriptions, click here.

TICKET INFORMATION: General admission tickets include access to the reading, a hardcover copy of Doerr’s new novel Cloud Cuckoo Land, and shipping within the United States. Your book will be shipped via USPS at the beginning of November to the address you provide. 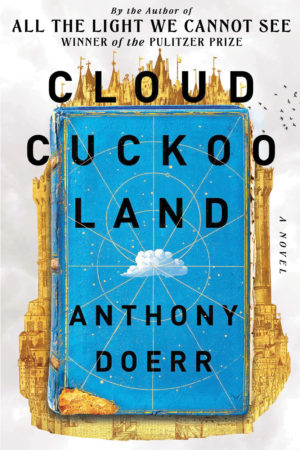 ANTHONY DOERR, who “takes language beyond its mortal limits” (Vanity Fair), is the author of the Pulitzer Prize-winning novel All the Light We Cannot See. Captivating readers around the world, All the Light We Cannot See remained on the New York Times Bestseller List for more than 200 weeks, sold more than nine million copies, and is being adapted into a Netflix limited series. Also the author of the novel About Grace, the memoir Four Seasons in Rome, and the story collections Memory Wall and The Shell Collector, Doerr has had his work translated into more than 40 languages. According to The New York Times, his “prose dazzles, his sinewy sentences blending the naturalist’s unswerving gaze with the poet’s gift for metaphor.” His numerous honors include five O. Henry Prizes, four Pushcart Prizes, four Ohioana Book Awards, the Rome Prize, and the Story Prize.

Doerr joins us to read from and talk about his new novel Cloud Cuckoo Land, which The Guardian calls “a dazzling epic of love, war, and the joy of books.” According to The Times, “Serious novels are rarely this fun. In a world where nature and stories are more precious than ever, this fine book is an education, a comfort, and an inspiration.” A starred Kirkus review adds, “Doerr builds a community of readers and nature lovers that transcends the boundaries of time and space. This is just one of the many narrative miracles worked by the author as he brings a first-century story to its conclusion in 2146.” Cloud Cuckoo Land was selected for the 2021 National Book Award longlist and named a most anticipated fall book by The New York Times, The Washington Post, TIME, NPR, and Good Morning America. Doerr, who lives in Boise, Idaho, writes a regular column on science books for The Boston Globe.