Core to the organization’s mission, Inprint proudly supports the next generation of creative writers in Houston. Through fellowships and juried prizes for graduate students at the University of Houston Creative Writing Program and an annual prize for an undergraduate at Rice University, Inprint is able to enhance the writing lives of the nation’s top emerging writers.

During the 2021 – 2022 academic year, Inprint awarded $251,500 in prizes and fellowships, the organization’s highest amount of support for students in a single year. Since 1983, Inprint support of emerging writers has totaled more than $4.5 million, serving 600+ students from all walks of life.  Recipients of these fellowships and prizes play an integral role in shaping the international literary landscape, and have gone on to publish books, win literary awards, serve as educators, and enrich the cultural life of Houston and other communities across the nation and around the world.

We offer our deepest thanks to the donors and underwriters of these fellowships and prizes, after whom these awards are named.

Aris Kian, Inprint Marion Barthelme Prize in Creative Writing at University of Houston
Aris Kian is a Houston enthusiast and a student of abolition. Her poems are published with The West Review, Obsidian Lit, Write About Now, and elsewhere. She engages with the socio-mythological landscape of the metropolitan city in her poems and hates taking the 610 West Loop. She ranks #10 in the 2020 Women of the World Poetry Slam and is the 2022 recipient of the Inprint Marion Barthelme Prize in Creative Writing.

Colton Alstatt, Inprint Marion Barthelme Prize in Creative Writing at Rice University
Colton Alstatt is a student writer who concerns themself with the intersection between humor and suffering in the Internet age. Colton believes the goal of literature is to provide readers with knowing company by mirroring the experience of being alive in odd or unexpected ways. Colton also serves as Editor-in-Chief of R2: The Rice Review and External Vice President of the Rice Music Collective (RMUC).

Madeleine Maillet, Inprint Joan and Stanford Alexander Prize in Fiction
Madeleine Maillet is a writer, translator, editor and French Canadian. Her stories have been published in a number of journals and anthologized in Best Canadian Short Stories 2020, and The Journey Prize Stories 27 (the Writer’s Trust award for the best short story published in a Canadian literary magazine). She is a Ph.D. Candidate in Literature and Creative Writing at the University of Houston where she holds the Inprint Brown Fellowship. She is a fellow of the Canada Council of the Arts (2020-2021) and has held fellowships from the Fulbright Foundation, the Canada Millennium Foundation, and the Jackman Humanities Institute at the University of Toronto.

Joy Priest, Inprint Paul Verlaine Prize in Poetry
Joy Priest is the author of Horsepower (Pitt Poetry Series, 2020), selected as the winner of the Donald Hall Prize for Poetry by U.S. Poet Laureate Natasha Trethewey. She is the recipient of a 2021 National Endowment for the Arts fellowship, a 2019-2020 Fine Arts Work Center fellowship, and the Stanley Kunitz Memorial Prize from the American Poetry Review. Her poems have appeared in numerous publications, including the Academy of American Poets’ Poem-a-Day series, The Atlantic, and Virginia Quarterly Review, among others, as well as in commissions for the Museum of Fine Arts Houston (MFAH) and the Los Angeles County Museum of Art (LACMA). Her essays have appeared in The Bitter Southerner, Poets & Writers, and ESPN. She is currently an Inprint MD Anderson Foundation Fellow and a doctoral student at the University of Houston.

Pritha Bhattacharyya, Inprint Donald Barthelme Prize in Fiction
Pritha Bhattacharyya is a Bengali-American writer. She is a fiction PhD candidate and Inprint C. Glenn Cambor Fellow in Literature and Creative Writing at the University of Houston. She received her MFA from Boston University, where she was awarded a Leslie Epstein Global Fellowship to travel to Osaka, Japan. She has received support from the Elizabeth George Foundation, the Sewanee Writers’ Conference, and the Alliance for Young Artists and Writers. She was a finalist for Glimmer Train‘s 2019 Short Story Award for New Writers. Her work appears or is forthcoming in Ecotone, Ninth Letter, Nashville Review, Bodega, and elsewhere.

Tayyba Maya Kanwal, Inprint Donald Barthelme Prize in Fiction
Tayyba Maya Kanwal is a Pakistani-American writer from Houston, TX. Her work appears in Witness Magazine, Meridian, Juxtaprose, Quarterly West and other journals, has been anthologized by The Doctor TJ Eckleburg Review, and nominated for the Pushcart Prize. She is a 2022 Inprint Donald Barthelme Prize in Fiction winner, Witness Magazine 2022 Literary Awards runner-up and CRAFT 2021 Fiction Elements Contest finalist. Maya is Fiction Editor at Gulf Coast Journal and an Inprint C. Glenn Cambor Fellow. She holds an MS in Mathematics from the University of Oregon and is a candidate for an MFA in Fiction at the University of Houston Creative Writing Program. She is completing a linked short story collection set in the Pakistani Muslim diaspora, and is also working on a novel.

Daniel Kennedy, Inprint Donald Barthelme Prize in Nonfiction
Daniel Kennedy grew up in rural Pennsylvania. He graduated from Boston University with a BA in English and was a member of BU’s Division 1 wrestling team. He holds an MFA from Virginia Tech, where he won the Emily Morrison Prize in Fiction. His writing has appeared in New England Review, The Carolina Quarterly, Arts & Letters, The Madison Review, and elsewhere. He previously served as an assistant fiction editor for Gulf Coast and managing editor for the minnesota review. He was awarded the 2022 Inprint Donald Barthelme Prize in Nonfiction and is currently a PhD candidate in the University of Houston’s Creative Writing Program. He’s working on his first novel.

Adele Elise Williams, Inprint Donald Barthelme Prize in Poetry
Adele Elise Williams is a writer, editor, and educator pursuing her PhD in Literature and Creative Writing at the University of Houston where she is a Nina and Michael Zilkha fellow. She is the winner of the 2022 Inprint Donald Barthelme Prize in Poetry and the 2019 Emily Morrison Prize in Poetry. Adele has also been awarded fellowships from UCROSS, Hindman Settlement School, and Muse Writing Center. As the nonfiction editor for Gulf Coast and a past editor for Noemi Press and the minnesota review, her writing has appeared in The Florida Review, Cream City Review, Split Lip, Guernica, Beloit Poetry Journal, among others. All the rest at adeleelisewilliams.com.

Emelie Griffin, Inprint Marion Barthelme Gulf Coast Prize
Emelie Griffin is a doctoral student at the University of Houston and the managing editor for Gulf Coast. She holds an MFA from Syracuse University. Her poetry has appeared in Pleiades, New England Review, American Chordata, and other journals. 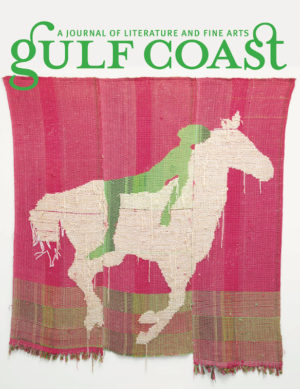 Since its inception, Gulf Coast: A Journal of Literature and Fine Arts, has been underwritten in part by Inprint, providing more than $250,000 over the years. Based at the University of Houston and run exclusively by the Creative Writing Program students, the literary journal publishes the work of established and emerging national writers and leading visual artists from the region. Nationally acclaimed and distributed, Gulf Coast also has a reading series and conducts a host of literary activities.