This virtual live stream reading will be accessible from the Inprint website. Details on how to access the reading will be provided to season subscribers and to those who purchase general admission tickets in the Eventbrite email receipt. 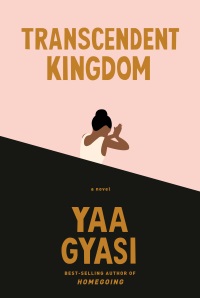 Yaa Gyasi will give a short reading from her new novel Transcendent Kingdom, followed by a conversation with novelist Wayétu Moore, to launch the 2020/2021 Inprint Margarett Root Brown Reading Series.

BOOK DISCOUNTS: Our partners at Brazos Bookstore are offering a 10% discount on Transcendent Kingdom by Yaa Gyasi. To receive the discount, order your copy of Gyasi’s new books at www.brazosbookstore.com starting three weeks prior to two days after the event. Enter INPRINT in the Coupon Code box in the Shopping Cart and then click on Apply To Order.

YAA GYASI’S debut novel Homegoing received many accolades, including the PEN/Hemingway Award, National Book Critics Circle’s John Leonard Award, Berlin Prize, and American Book Award, among others. Born in Ghana and raised in Huntsville, Alabama, Gyasi was inspired to pursue a career as a writer after reading Toni Morrison’s Song of Solomon and receiving a certificate of achievement signed by LeVar Burton for her very first story, submitted to the Reading Rainbow Young Writers and Illustrators Contest. A National Book Foundation’s 5 under 35 honoree and recipient of the 2020 Vilcek Prize for Creative Promise in Literature, she holds a BA in English from Stanford and an MFA from the Iowa Writers’ Workshop. Her work has appeared in African American Review, Callaloo, Guernica, The Guardian, and elsewhere. Yaa Gyasi’s new novel Transcendent Kingdom, according to Publishers Weekly, “at once a vivid evocation of the immigrant experience and a sharp delineation of an individual’s inner struggle, brilliantly succeeds on both counts.” Roxanne Gay writes, “Not a word or idea out of place. Completely different from Homegoing. THE RANGE. I am quite angry this is so good.” The novel is Jenna Bush’s “Read with Jenna” book club pick for September on The Today Show.

Wayétu Moore is author of the novel She Would Be King, named a 2018 best book by Publishers Weekly, Booklist, Entertainment Weekly and BuzzFeed. Her memoir The Dragons, The Giant, The Women, released in June 2020, documents her family’s escape from wartorn Liberia when she was five, her years adjusting to life in Houston as a Black woman and an immigrant, and her return to Liberia as an adult. She is the founder of One Moore Book, a non-profit that creates and distributes culturally relevant books for underrepresented readers. Her first bookstore opened in Monrovia, Liberia in 2015.