This special virtual event of the Inprint Margarett Root Brown Reading Series is presented in partnership with Brazos Bookstore.

TICKETS: Season subscribers of the 40th anniversary Inprint Margarett Root Brown Reading Series will be provided tickets to this event, which will include access to view the live virtual reading/conversation and a copy of Atwood’s first poetry collection in more than ten years, Dearly. To purchase general admission tickets via Brazos Bookstore, click here. 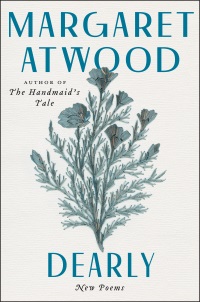 Margaret Atwood, whose work has been published in over 45 countries, is the author of more than 50 books of fiction, poetry, essays, and graphic novels. In addition to The Handmaid’s Tale, now an award-winning TV series, her novels include Alias Grace, which won the Giller Prize in Canada and the Premio Mondello in Italy; The Blind Assassin, winner of the 2000 Booker Prize; the MaddAddam trilogy; and The Testaments, which won the 2019 Booker Prize. Atwood will be reading from and talking about Dearly, her first poetry collection in more than a decade. According to the Poetry Foundation, Atwood “first came to public attention as a poet in the 1960s with her collections Double Persephone and The Circle Game, winner of a Governor General’s award.” “There is a pleasing consistency in these poems,” Jay Parini wrote of her 2007 collection The Door, “which are always written in a fluent free verse, in robust, clear language. Atwood’s wit and humour are pervasive, and few of the poems end without an ironic twang.” She lives in Toronto.