Inprint and Asia Society Texas are proud to present Baylor College of Medicine physician and hospitalist Ricardo Nuila, sharing his debut book The People’s Hospital: Hope and Peril in American Medicine. The program will include a reading and on-stage conversation with Inprint Donald Barthelme Prize in Fiction winner Tayyba Maya Kanwal, followed by a book sale and signing.

“Ricardo Nuila takes a literary scalpel to the U.S. medical system….The People’s Hospital is the antidote to hopelessness in healthcare that prevails.”
— Roberto Lovato, author of Unforgetting

“With humanity and humility, Nuila guides us from a place of deep understanding, rooted in low-income communities in Houston, to a destination of healthcare as a human right for the entire country.”
—Dave A. Chokshi, MD, 43rd Health Commissioner of New York City 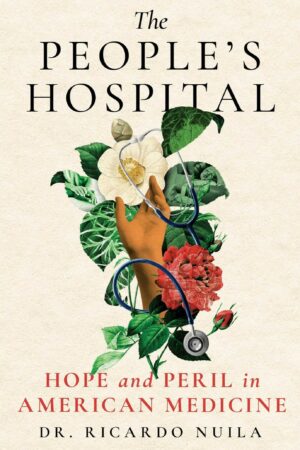 In the richest country on earth, why does the high cost of health care leave millions without access to lifesaving treatments? And how do we change a system so mired in politics and corporatism? In The People’s Hospital, Ricardo Nuila takes us inside Ben Taub—a publicly funded hospital that provides accessible, quality care for pennies on the dollar—where he has worked as a physician for more than a decade. He shares the experiences of five desperately ill patients, braiding their stories into a narrative that defies the notion that good healthcare in America is available only to the well insured. As readers follow the twists and turns of these astonishing patient journeys, it becomes undeniable that the system is broken—and that Ben Taub’s innovative model, which emphasizes people over payments, could represent a brighter path forward.

Nuila is an associate professor of medicine, medical ethics, and health policy at Baylor College of Medicine, where he directs the Humanities Expression and Arts Lab program. His reporting on Hurricane Harvey, COVID-19, and health disparities has appeared in Texas Monthly, The New York Times, The Atlantic, and The New Yorker. His fiction has appeared in Guernica, New England Review, McSweeney’s, and other literary magazines. He is the winner of the Seeds of Hope Award, the Doctors for Change Health Advocacy Award, and the New England Review Award for Emerging Writers. He lives in Houston and serves on the Inprint Advisory Board.

Tayyba Maya Kanwal is a Pakistani-American writer from Houston, and fiction editor at Gulf Coast Journal. Her work appears in Witness Magazine, Meridian, Quarterly West, and other journals, and has been nominated for a Pushcart Prize. She is winner of a 2022 Inprint Donald Barthelme Prize in Fiction and Witness Magazine 2022 Literary Awards runner-up. An Inprint C. Glenn Cambor Fellow and MFA candidate at the UH Creative Writing Program, she holds an MS in Mathematics from the University of Oregon and leads Inprint writing workshops for healthcare providers at Baylor College of Medicine, Houston Methodist, and Texas Children’s Pediatrics.