Inprint and Asia Society Texas are thrilled to co-present New York Times bestselling author of Crying in H Mart Michelle Zauner and acclaimed author Bryan Washington for a conversation on the development of her memoir, the origins and successes of her band Japanese Breakfast, writing about food, and how her family and Korean heritage has influenced her art.

Books will be available for purchase at the event and there will be an on-site book-signing following the program. Guests can also indulge all their Korean food cravings either before or after the program with delicious treats from Seoulside Wings food truck that will be available on-site. For more information about the venue’s health and safety procedures, click here. 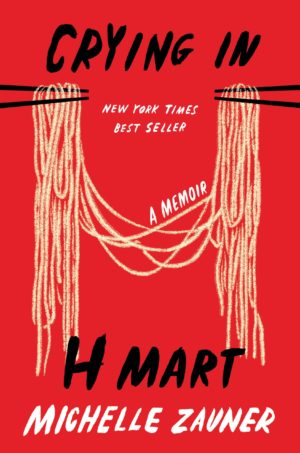 In her New York Times best-selling memoir Crying in H Mart, indie rockstar MICHELLE ZAUNER writes about growing up Korean American, losing her mother, and forging her own identity. As one of the few Asian American kids at her school in Eugene, Oregon, she struggled with her mother’s high expectations while treasuring visits to her grandmother’s tiny apartment in Seoul. As she grew up, moving to the East Coast for college and performing gigs with her fledgling band, her Koreanness began to feel ever more distant, even as she found the life she wanted to live. It was her mother’s diagnosis of terminal cancer, when Michelle was 25, that forced a reckoning with her identity and brought her to reclaim the gifts of taste, language, and history her mother had given her.

Michelle Zauner is best known as a singer and guitarist who creates dreamy, shoegaze-inspired indie pop under the name Japanese Breakfast. She has won acclaim from major music outlets around the world for releases like Psychopomp (2016) and Soft Sounds from Another Planet (2017). Her most recent album, Jubilee (2021), earned two Grammy nominations for Best New Artist and Best Alternative Music Album. Her first book, Crying in H Mart, an unflinching, powerful memoir about growing up Korean-American, losing her mother, and forging her own identity, is a New York Times bestseller. She’s currently adapting the memoir for the screen for MGM’s Orion Pictures.

BRYAN WASHINGTON is a writer from Houston. His debut short story collection, Lot, was published in 2019 and his first novel, Memorial, was published in 2020, both by Riverhead Books and Atlantic Books UK. He’s received a National Book Award 5 Under 35 honor, a New York Public Library Young Lions Award, an Ernest J. Gaines Award, an International Dylan Thomas Prize, a Lambda Literary Award, and was a finalist for the National Book Critics Circle Fiction Award, a Joyce Carol Oates Prize, a PEN/Robert W. Bingham Prize, and was named one of Forbes’ 30 Under 30. He has written for The New Yorker, The New York Times, The New York Times Magazine, BuzzFeed, and GQ, among other publications.