To get tickets to JLF Houston, click here and use the discount code JLF2022. To see the schedule for Day 2, click here.

The exhilarating energy of the Jaipur Literature Festival returns to Houston this year to celebrate the unique culture, diversity, and energy of the Bayou City. Join Teamwork Arts, the producer of JLF Houston, for a weekend of live in-person programs that showcase South Asia’s rich literary and oral heritage, while also featuring authors from around the world as well as local literary figures. The 5th edition JLF Houston is scheduled to take place on September 9-10 and is presented in association with the Consulate General of India, Asia Society Texas, and Inprint. 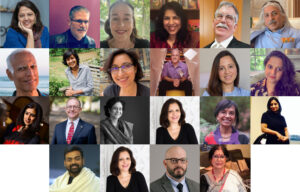 Masala: Recipes from India
11 am – 1:30 pm, The Bake Lab, above Pondicheri Café
Anita Jaisinghani in conversation with Sanjoy K. Roy

Award-winning chef Anita Jaisinghani’s cookbook Masala: Recipes from India, the Land of Spices, is an ode to India’s rich culinary history. In a session that evokes food, memory and a platter of cuisines, Jaisinghani – chef and founder of the famed Pondicheri restaurant in Houston – pays homage to the wisdom and techniques of Indian cooking.

Swami Vivekananda: The Modern Monk
A session of Music and Remembrance with Reba Som

In a session of music and spirituality, author, classical singer and historian Dr. Reba Som takes us on a melodic journey through Vivekananda’s life and also speaks of one of his most cherished disciples, Margaret Noble, known to the world as Sister Nivedita. A chief disciple of the 19th-century Indian mystic Ramakrishna, Swami Vivekananda’s pathbreaking speech at the World’s Parliament of Religions in 1893 introduced Hinduism to America.

As the world teeters on the edge of economic and environmental collapse, geopolitical compulsions and political hubris script further disasters. A thoughtful session that searches for direction and hope amidst the pervading chaos of a tense present.

JLF Houston is made possible by the generous support of Shazma and Arshad Matin, the Houston Endowment, and the Texas Commission on the Arts.