This is a livestream reading and will be accessible from the Inprint website. Details on how to access the reading will be provided to season subscribers and to those who purchase $5 general admission tickets in their Eventbrite email receipts.

EVENT DETAILS: Wole Soyinka will give a brief reading from his new novel Chronicles from the Land of the Happiest People on Earth, followed by a conversation with John Guess, Chief Executive Officer at the Houston Museum of African American Culture.

BOOK DISCOUNTS: Our partners at Brazos Bookstore are offering a 10% discount on Chronicles from the Land of the Happiest People on Earth by Wole Soyinka. To receive the discount, order your copy of Soyinka’s new book at www.brazosbookstore.com from now through November 17th using the coupon code INPRINT. 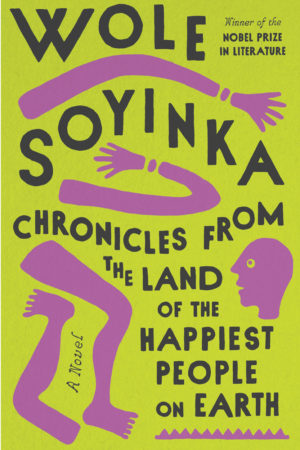 “You don’t see things the same way when you encounter a voice like that of WOLE SOYINKA,” said Toni Morrison. Wole Soyinka is a distinguished playwright, poet, novelist, and political activist from Nigeria. The first African writer to win the Nobel Prize for Literature, Soyinka, who writes in English, is the author of five memoirs, eight poetry collections, 14 essay collections, and 30 plays that draw richly on Nigerian politics and mythology. His two previous novels, The Interpreters and Season of Anomy, garnered him a global reputation as “the conscience of Nigeria” (The New York Times) and won the New Statesmen Literary Prize. His other honors include the Anisfield-Wolf Lifetime Achievement Award and the Golden Plate Award from the American Academy of Achievement, presented by Archbishop Desmond Tutu.

Soyinka joins us to read from and talk about his first novel in 48 years, Chronicles from the Land of the Happiest People on Earth. Set in an imaginary Nigeria, the book is “at once a caustic political satire, a murder mystery, a conspiracy story, and a deeply felt lament for the spirit of a nation” informed by Soyinka’s lifelong dedication to human rights and fierce opposition to political tyranny (The New York Times). According to Ben Okri in The Guardian, “If you want to know what kind of novel can be written by someone who has survived in a difficult land but kept their creative conscience alive, Chronicles from the Land of the Happiest People on Earth answers that question. This is Soyinka’s greatest novel, his revenge against the insanities of the nation’s ruling class and one of the most shocking chronicles of an African nation in the 21st century. It ought to be widely read.” Since the 1960s, Soyinka has advocated for Nigerian democracy and spoken out against military dictatorships worldwide. He is founder of the Democratic Front for a People’s Federation and famously slipped his poems out of prison on scraps of paper. He lives in Abeokuta, Nigeria.

JOHN GUESS is the Chief Executive Officer at the Houston Museum of African American Culture and serves on the boards of the Contemporary Art Museum Houston, the Museum of Fine Arts Glassell School, Art Lies, the Houston Arts Alliance, and Artadia.