This livestream reading will be accessible from the Inprint website.  Details on how to access the reading will be provided to season subscribers and to those who purchase general admission tickets in the Eventbrite email receipt.

Viet Thanh Nguyen will give a short reading from his new novel The Committed,  followed by a conversation with Houston writer and Inprint Advisory Board member Sarah Choi. For more information about the 2020/2021 Inprint Margarett Root Brown Reading Series, click here.

BOOK DISCOUNTS: Our partners at Brazos Bookstore are offering a 10% discount on The Committed by Viet Thanh Nguyen. To receive the discount, order your copy of Nguyen’s new book at www.brazosbookstore.com starting three weeks prior to two days after the event. Enter INPRINT in the Coupon Code box in the Shopping Cart and then click on Apply To Order. 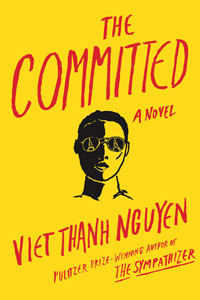 Viet Thanh Nguyen, whose family came to the U.S. as refugees during the Vietnam War in 1975, wrote his debut novel The Sympathizer, which depicts the war from a Vietnamese perspective because of the lack of representation he noticed. According to The New York Times, Nguyen’s debut – which won the Pulitzer Prize, the Dayton Literary Peace Prize, an Edgar Award for Best First Novel from the Mystery Writers of America, the First Novel Prize from the Center for Fiction, a Carnegie Medal for Excellence in Fiction from the American Library Association, le Prix du meilleur livre étranger (Best Foreign Book in France), and the Asian/Pacific American Award for Literature – “fills a void… giving voice to the previously voiceless while it compels the rest of us to look at the events of 40 years ago in a new light.” He is also the author of the story collection The Refugees, the children’s book Chicken of the Sea, and two nonfiction works including Nothing Ever Dies: Vietnam and the Memory of War. Nguyen joins us to read from and talk about his new novel, The Committed, a sequel to The Sympathizer, set in 1980s Paris, which Laila Lalami calls “a rich and exhilarating story of friendship, loyalty, and greed.” Ocean Vuong adds, “Fierce in tone, capacious, witty, sharp, and deeply researched, The Committed marks, not just a sequel to its groundbreaking predecessor, but a sum total accumulation of a life devoted to Vietnamese American history and scholarship.” A MacArthur Fellow, Nguyen teaches at the University of Southern California and serves as a cultural critic-at-large for The Los Angeles Times.