Tickets for this reading include a copy of Ta-Nehisi Coates’s new novel The Water Dancer (for pickup at the reading). Please note that Mr. Coates will not be participating in a book signing. 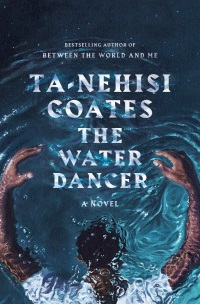 TA-NEHISI COATES’S “visceral, eloquent, and beautifully redemptive” language has been hailed by the legendary Toni Morrison as “required reading,” and The New York Observer calls him “the single best writer on the subject of race in the United States.” Coates’s groundbreaking book Between the World and Me—an essay in the form of a letter to his son—was a #1 New York Times bestseller, won the National Book Award and a NAACP Image Award, was a finalist for the Pulitzer Prize and National Book Critics Circle Award, and was on several end of the year best books lists. The Boston Globe describes it as “echoing Ralph Ellison’s Invisible Man” and “written in the tradition of James Baldwin.” A former national correspondent for The Atlantic, Coates has been praised for his journalism on cultural, political, and social issues and his recognized pieces include “The Black Family in the Age of Mass Incarceration,” “The Case for Reparations,” “Fear of a Black President,” and “This is How We Lost to the White Man.” In 2017, his essays were published in We Were Eight Years in Power, an “emotionally charged, deftly drafted, and urgently relevant” (Kirkus Reviews) collection examining the nation’s cultural and political landscape during the Obama administration. Coates, a MacArthur fellow, is also the author of the memoir The Beautiful Struggle and the current author for Black Panther and Captain America comic series. He will read from his highly anticipated debut novel The Water Dancer. “In prose that sings and imagination that soars,” Publisher Weekly says with this novel, “Coates further cements himself as one of this generation’s most important writers, tackling one of America’s oldest and darkest periods with grace and inventiveness. This is bold, dazzling, and not to be missed.”