EVENT DETAILS: Ruth Ozeki will give a brief reading from her new novel The Book of Form and Emptiness, followed by a conversation with fiction writer Elizabeth McCracken, author of the novel The Giant’s House and the short story collection The Souvenir Museum. For information on season subscriptions, click here.

TICKET INFORMATION: General admission tickets include access to the reading, a hardcover copy of Ozeki’s new novel The Book of Form and Emptiness, and shipping within the United States. Your book will be shipped via USPS at the beginning of October to the address you provide. 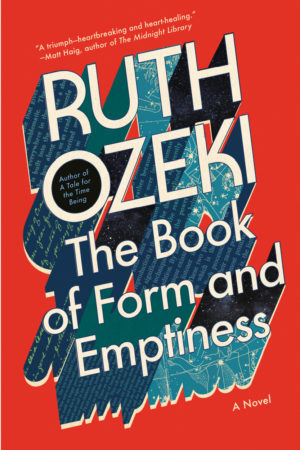 Japanese American novelist RUTH OZEKI has been called “one of our era’s most compassionate and original minds” by Dave Eggers. Ozeki’s first two novels, My Year of Meats and All Over Creation, found an international audience and were selected as New York Times Notable Books. Her third novel A Tale for the Time Being was a finalist for the Booker Prize and the National Book Critics Circle Award and has been published in more than 30 countries. “A comical-satirical-farcical-epical-tragical-romantical novel” (The Chicago Tribune) said to be filled with “mysteries to be solved and ideas to be explored” (The Washington Post), A Tale for the Time Being was also winner of the Los Angeles Times Book Prize and the Yasnaya Polyana Literary Award.

Ozeki joins us to read from and talk about her new novel The Book of Form and Emptiness, a poignant tale about grief, growing up, and the importance of our relationship to everyday objects. According to David Mitchell, “This compassionate novel of life, love, and loss glows in the dark….If you’ve lost your way with fiction over the last year or two, let The Book of Form and Emptiness light your way home.” Karen Joy Fowler adds, “Once again, Ozeki has created a masterpiece. Her generous heart, remarkable imagination, and brilliant mind light up every page.” Ozeki’s nonfiction work includes the memoir The Face: A Time Code and the documentary film Halving the Bones, which was screened at MoMA, the Sundance Film Festival, and the Montreal World Film Festival. Ozeki is ordained as a Zen Buddhist priest and splits her time between Cortes Island, British Columbia, and New York, New York.

ELIZABETH MCCRACKEN is the author of seven books, including The Giant’s House, An Exact Replica of a Figment of My Imagination, Bowlaway, and the forthcoming story collection The Souvenir Museum. Her work has appeared in Best American Short Stories and The New York Times Magazine, and she has won three Pushcart Prizes, the Story Prize, and the O. Henry Prize. McCracken teaches creative writing at the University of Texas at Austin.