This livestream reading will be accessible from the Inprint website. Details on how to access the reading will be provided to season subscribers and to those who purchase $5 general admission tickets in their Eventbrite email receipts.

Please note that due to bad weather in the village that Nobel Prize winner Olga Tokarczuk lives in, her internet connection was down on the orignally scheduled event time of Sunday, February 27, 3 pm CT. Therefore the event has been rescheduled for Monday, March 7, 7 pm CT.

EVENT DETAILS: Olga Tokarczuk and translator Jennifer Croft will give brief readings from Tokarczuk’s new novel The Books Of Jacob in Polish and English, followed by a conversation with former Houston Poet Laureate Robin Davidson.

BOOK DISCOUNTS: Our partners at Brazos Bookstore are offering a 10% discount on The Books of Jacob by Olga Tokarczuk. To receive the discount, order your copy of Tokarczuk’s new book at www.brazosbookstore.com from now through March 9th using the coupon code INPRINT. 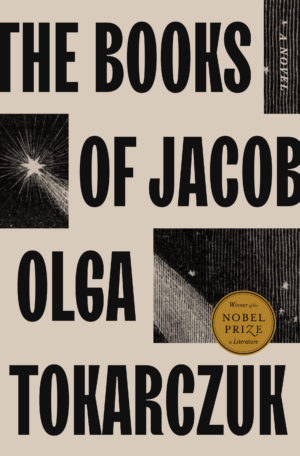 OLGA TOKARCZUK, when she was awarded the 2018 Nobel Prize in Literature, was praised by the selection committee for “a narrative imagination that with encyclopedic passion represents the crossing of boundaries as a form of life.” A bestselling author in her home country of Poland, whose work has been translated into more than 50 languages, Tokarczuk has published nine novels, two story collections, five nonfiction works, a collection of poetry, and a children’s book. She rose to international acclaim after her seventh novel, Flights, called “an indisputable masterpiece” by Publishers Weekly, won the Booker International Prize and the Nike Prize, Poland’s most prestigious literary award. Her eighth novel, Drive Your Plow Over the Bones of the Dead, earned nominations for the Booker International Prize, National Book Award for Translated Literature, and PEN/America Translation Prize. About the book, Annie Proulx writes, “Extraordinary. Tokarczuk’s novel is funny, vivid, dangerous, and disturbing, and it raises some fierce questions about human behavior. My sincere admiration for her brilliant work.”

Tokarczuk joins us to read from and talk about her magnum opus, The Books of Jacob, translated by Jennifer Croft. A journey across seven borders, five languages, and three major religions, beginning in 1752 and ending in the mid-20th century, the book revolves around the controversial 18th century Polish-Jewish religious leader Jacob Frank. After its publication in Poland in 2014, The Books of Jacob was a national bestseller for nearly a year and the recipient of the Nike Prize, Nike Audience Award, Kulturhuset Stadsteatern International Literary Prize in Stockholm, and the Swiss Jan Michalski Prize. The Michalski jury called it a “work of immense erudition with a powerful epic sweep….a universal tale of the struggle against rigid thinking, either religious or philosophical….that warns against our inability to embrace an environment complex in its diversity….The Books of Jacob, by telling the past with a dazzling virtuosity, helps us to better understand the world in which we live.” Each year, Tokarczuk co-hosts an annual literary festival near her home in Silesia, Poland, and funds scholarships for aspiring writers.

JENNIFER CROFT, the translator into English of Olga Tokarczuk’s novel The Books of Jacob, won the 2020 William Saroyan International Prize for her illustrated memoir, Homesick, and was co-awarded the 2018 Booker International Prize for her translation of Tokarczuk’s Flights. She is also the recipient of Cullman, Fulbright, PEN, MacDowell and NEA grants and fellowships, the inaugural Michael Henry Heim Prize for Translation, and the 2018 Found in Translation Award. She holds a PhD from Northwestern University and an MFA from the University of Iowa. Her work has appeared in The New York Times, Granta, Los Angeles Review of Books, The New Republic, The Guardian, and elsewhere.

ROBIN DAVIDSON, Houston Poet Laureate (2015–2017), is the author of Luminous Other, recipient of the Ashland Poetry Press Richard Snyder Prize, and two chapbooks, Kneeling in the Dojo and City that Ripens on the Tree of the World. Recipient of an NEA fellowship in translation, she is co-translator with Ewa Elżbieta Nowakowska of two volumes of Ewa Lipska’s poems from the Polish, The New Century and, most recently, Dear Ms. Schubert (Princeton University Press, 2021). Davidson served as a Fulbright scholar at the Jagiellonian University in Kraków, Poland, is a member of the Texas Institute of Letters, and teaches literature and creative writing as professor emeritus of English for the University of Houston-Downtown. Her newest book of poems, Mrs. Schmetterling, is scheduled for release from Arrowsmith Press in December 2021.