This live stream reading will be accessible from the Inprint website. Details on how to access the reading will be provided to season subscribers and to those who purchase general admission tickets in the Eventbrite email receipt. 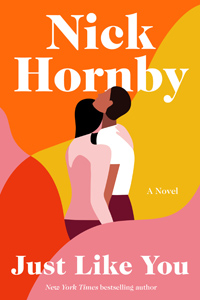 Nick Hornby will give a short reading from his new novel Just Like You, followed by a conversation with novelist/journalist Vendela Vida. For more information on the 2020/2021 Inprint Margarett Root Brown Reading Series click here.

BOOK DISCOUNTS: Our partners at Brazos Bookstore are offering a 10% discount on Just Like You by Nick Hornby. To receive the discount, order your copy of Hornby’s new books at www.brazosbookstore.com starting three weeks prior to two days after the event. Enter INPRINT in the Coupon Code box in the Shopping Cart and then click on Apply To Order.

Nick Hornby,  whose books have sold more than five million copies worldwide, is, according to The New York Times, “a writer who dares to be witty, intelligent, and emotionally generous all at once.” His seven earlier novels include High Fidelity, About a Boy, Juliet, Naked, and A Long Way Down, which were made into feature films starring John Cusack, Hugh Grant, and Ethan Hawke, among others, and an original Hulu series starring Zoe Kravitz. The New Yorker wrote of High Fidelity, his fiction debut, “It is rare that a book so hilarious is also so sharp about sex and manliness, memory, and music.” Hornby will be reading from and talking about Just Like You, his new novel, in which, according to Publishers Weekly, he “lives up to his reputation as bard of the everyday in this thoughtful romance that crosses lines of race, age, and class.” The Millions adds, “In this age of lockdowns and social distancing, the novel asks timely questions about how people manage to connect when confronted with seemingly insurmountable obstacles.” Hornby’s nonfiction includes Fever Pitch, Songbook, and Ten Years in the Tub. He has twice been nominated for an Oscar for the screenplays An Education and Brooklyn, and his ten-part television series State of the Union won three Emmys. Hornby lives in London.

Vendela Vida is the award-winning author of six books, including Let the Northern Lights Erase Your Name and The Diver’s Clothes Lie Empty. Her new novel, We Run the Tides, will be published in February 2021. She is a founding editor of The Believer magazine, and a founding board member of 826 Valencia, the San Francisco writing center for youth. She lives in the Bay Area with her family.