This live stream reading will be accessible from the Inprint website. . Details on how to access the reading will be provided to season subscribers and to those who purchase general admission tickets in the Eventbrite email receipt.

Julia Alvarez and Sigrid Nunez will give short readings from their new novels Afterlife and What Are You Going Through,  followed by a conversation with Houston writer, educator, and Ink Well podcast host Jasminne Mendez. For more information about the Inprint Margarett Root Brown Reading Series click here.

BOOK DISCOUNTS: Our partners at Brazos Bookstore are offering a 10% discount on Afterlife by Julia Alvarez and What Are You Going Through by Sigrid Nunez. To receive the discount, order your copy of new books by Alvarez and Nunez at www.brazosbookstore.com starting three weeks prior to two days after the event. Enter INPRINT in the Coupon Code box in the Shopping Cart and then click on Apply To Order. 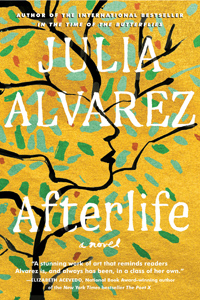 Julia Alvarez is the Dominican-American author of six renowned novels, including In the Time of the Butterflies (with more than one million copies in print), ¡Yo! and How the García Girls Lost Their Accents (her acclaimed debut). She will be joining us to read from and talk about her new novel, Afterlife, “a gorgeously intimate portrait of an immigrant writer and recent widow carving out hope in the face of personal and political grief” (O, The Oprah Magazine), which Kirkus (in a starred review) calls “a funny, moving novel of loss and love” and Luis Alberto Urrea describes as “the exact novel we need in this fraught era… a powerful testament of witness and humanity written with audacity and authority.” Alvarez is also author of three works of nonfiction, three poetry collections, and 11 books for children and young adults. Her awards include the Pura Belpré and Américas Awards for young readers, the Lamont Prize from the Academy of American Poets, the Hispanic Heritage Award, and in 2013, the National Medal of Arts from President Obama in recognition of her extraordinary storytelling. She has taught and mentored writers in schools and communities across the U.S. and, until her retirement in 2016, was a writer-in-residence at Middlebury College. 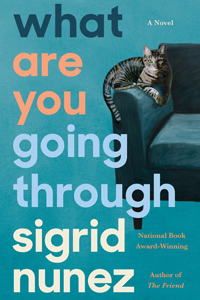 Sigrid Nunez, daughter of a German mother and a Chinese-Panamanian father, is the critically acclaimed author of seven novels, including her debut, A Feather on the Breath of God, Salvation City (in which a 13-year-old boy is orphaned in a global flu pandemic and sent to live with an evangelical pastor and his wife), and The Friend, which won the 2018 National Book Award. She is also author of Sempre Susan: A Memoir of Susan Sontag. She will be joining us to read from and talk about her new novel, What Are You Going Through, which Kirkus (in a starred review) calls “spare and elegant and immediate. . . dryly funny and deeply tender.” Booklist (also a starred review) writes, “With both compassion and joy, Nunez contemplates how we survive life’s certain suffering and don’t, with words and one another.” Her work has been translated into more than 20 languages, and her awards include a Whiting Award, the Rome Prize in Literature, and four Pushcart Prizes. She has taught at Columbia, Princeton, The New School, and the Bread Loaf Writers’ Conference, and currently resides in New York City, the place of her birth.