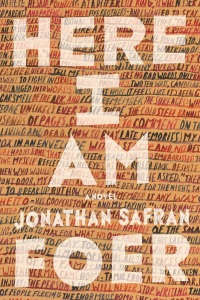 JONATHAN SAFRAN FOER burst onto the literary scene in 2002 with his debut novel Everything Is Illuminated. “Not since Anthony Burgess’s A Clockwork Orange has the English language been simultaneously mauled and energized with such brilliance and brio,” wrote Francine Prose in The New York Times. The novel, which was made into a feature film, won The Guardian First Book Prize and the National Jewish Book Award. His second novel Extremely Loud and Incredibly Close—also made into an Oscar-nominated film—became an international bestseller. Foer comes to Houston on a limited tour to share his highly anticipated new novel Here I Am. Showcasing the high-energy inventiveness, irreverence, and emotional urgency of his previous work (with a harder edge), The New York Times says the novel “unfolds over a single month in present-day Washington, as a Jewish family with three sons falls apart after the parents’ marriage falters.” Foer is “one of the few contemporary writers willing to risk sentimentalism to address great questions of truth, love, and beauty” (Publishers Weekly). Joyce Carol Oates says, “He will win your admiration, and he will break your heart.” His books have been translated into more than 35 languages, and he is also author of Eating Animals (nonfiction) and The New American Haggadah (with Nathan Englander), and editor of an anthology of fiction and poetry, A Convergence of Birds, inspired by the works of Joseph Cornell.