EVENT DETAILS: Jonathan Franzen will give a brief reading from his new novel Crossroads, followed by a conversation with fiction writer David Means. For information on season subscriptions, click here.

TICKET INFORMATION: General admission tickets include access to the reading, a hardcover copy of Franzen’s new novel Crossroads, and shipping within the United States. Your book will be shipped via USPS at the beginning of November to the address you provide. 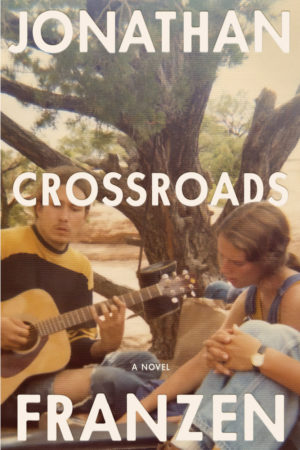 JONATHAN FRANZEN’s writing will make you “laugh, wince, groan, weep, leave the table, and maybe the country, promise never to go home again, and be reminded of why you read serious fiction in the first place” (The New York Review of Books). A master of family drama, Franzen is the author of five novels including Purity, Freedom, and The Twenty-Seventh City. His third novel The Corrections drew widespread critical acclaim, earning him the National Book Award and a nomination for the Pulitzer Prize, the National Book Critics Circle Award, and the PEN/Faulkner Award. In the words of his contemporary and friend David Foster Wallace, “Funny and deeply sad, large-hearted and merciless, The Corrections is a testament to the range and depth of pleasures great fiction affords.”

Franzen joins us to read from and talk about his first book in a new trilogy Crossroads: A Key to All Mythologies, Volume 1, which traces fraught family relationships across three generations. According to a starred Kirkus review, “Franzen imbues his books with big ideas, in this case about responsibility to family, self, God, country, and one’s fellow man, among other matters, all the while digging deep into his characters’ emotions, experiences, desires, and doubts in a way that will please readers seeking to connect to books heart-first.” Franzen is also a frequent contributor to The New Yorker, where he writes essays on contemporary fiction, climate change, travel, technology, and more. He was named one of Time’s “100 Most Influential People in the World” and is a member of the American Academy of Arts and Letters, the German Akademie der Künste, and the French Ordre des Arts et des Lettres. Franzen is an avid bird watcher and lives in Santa Cruz, California.

DAVID MEANS is the author of five short story collections, including Assorted Fire Events, The Secret Goldfish, and Instructions for a Funeral, and the novel Hystopia. His books have been translated into eight languages, and he has won two O. Henry Prizes, the Pushcart Prize, and the Los Angeles Times Book Prize. His work has appeared in The New Yorker, Harper’s Magazine, Esquire, The Best American Short Stories, and elsewhere. He teaches English at Vassar College.