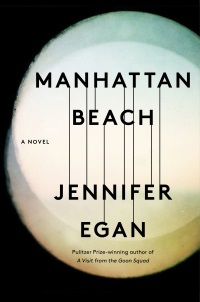 For a map and parking instructions at Stude Concert Hall click here.

JENNIFER EGAN’s 2011 Pulitzer Prize and National Book Critics Circle Award-winning novel A Visit from the Goon Squad was hailed as “a new classic of American fiction” by Time magazine. Also a winner of the Los Angeles Times Book Prize and named as one of the best books of the year by the Boston Globe, Publishers Weekly, San Francisco Chronicle, and The Washington Post, the novel, according to The Daily Beast, cemented Egan’s “reputation as one of America’s best, and least predictable, literary novelists.” Her other works include the national bestseller The Keep, the National Book Award finalist Look at Me, Emerald City and Other Stories, and The Invisible Circus, which was made into a feature film starring Cameron Diaz. Also an award-winning journalist, she writes frequently for the New York Times Magazine. Egan will read from Manhattan Beach, coming out in October, her first historical novel, set in the 1930s and 40s, as the Brooklyn Naval Yard’s first female diver learns more about the mystery surrounding her father’s disappearance.

CLAIRE MESSUD “has many gifts as a novelist,” writes The Denver Post. “She writes well, dramatizes, has a sharp ear, a literary critic’s knack for marshaling and reverberating themes and, most crucially, a broad and deep empathy that enables her to portray a wide range of characters from the inside.” Her fifth novel The Woman Upstairs, a New York Times Notable Book, was described by The Guardian as a “brave and highly risky novel…. Claire Messud should achieve literary giant status.” Her bestselling novel The Emperor’s Children was longlisted for the Man Booker Prize and was named a best book of the year by The New York Times, Los Angeles Times, and The Washington Post. Her novels When the World Was Steady and The Hunters were finalists for the PEN/Faulkner Award, and her novel The Last Life was a Publishers Weekly Best Book of the Year and The Village Voice’s Editor’s Choice. She will read from her new novel The Burning Girl, a compelling coming-of-age story about friendship, family, and community.

“This Week in Fiction: Jennifer Egan,” an interview by Deborah Treisman, The New Yorker, May 25, 2012.

“A Visit from the Goon Squad by Jennifer Egan: Marcel Proust and The Sopranos serve as the unlikely inspirations for this ambitious study of time and relationships”—a review by Sarah Churchwell, The Guardian, March 12, 2011.

“Who’s Afraid of Claire Messud? The novelist’s characters have been called “difficult women.” She would say they are simply women with desires.” An interview with Claire Messud about her new novel The Burning Girl, The New York Times Magazine, August 10, 2017.

“Claire Messud: ‘I still believe at the end somebody will say: and you get an A-minus for your life’” an interview by Alex Clark, in The Guardian, August 2, 2013.

“The End of Irony,” a review of The Emperor’s Children, by Meghan O’Rourke, in The New York Times Sunday Book Review, August 27,2006.