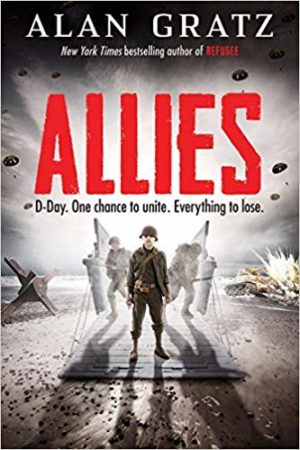 Set in a single day during World War II, Allies has been called “both an excellent, inclusive narration of important historical events and a fast-paced, entertaining read” by Kirkus Reviews, and a “tautly paced and multifaceted portrait of the D-Day invasion” by Publishers Weekly.

Gratz is the author of several books for young readers, including Grenade, Refugee, and Projekt 1065. His first novel Samurai Shortstop appeared in the 2007 American Library Association’s Top Ten Best Books for Young Adults, and Prisoner B-3087, his middle-grade holocaust novel, was a Junior Library Guild selection that has won 8 state awards and been named to YALSA’s 2014 Best Fiction for Young Adults list. His 2017 novel Refugee has received many awards and was named a Global Read Aloud Book for 2018. It has spent more than a year on the New York Times bestseller list.

In 2010, as the American School in Japan’s first Artist-in-Residence, Alan spent six weeks teaching historical fiction-writing to middle-school students in Tokyo. The following year he was the Thurber House Children’s Writer-in-Residence, living and writing in The New Yorker cartoonist James Thurber’s attic for a month while working with young writers from all around the Columbus, Ohio area.

Born and raised in Knoxville, Tennessee, Alan earned a College Scholars degree in creative writing and a Master’s degree in education at the University of Tennessee. By the 5th grade he had produced a newspaper, Blue Spring Lane News, and written his first book, titled Real Kids Don’t Eat Spinach, and had he not been a writer his dream job would have been gameshow host. He currently resides with wife Wendi and daughter Jo in Asheville, North Carolina where he enjoys spending his time reading, playing board and video games, and researching and outlining his future projects.