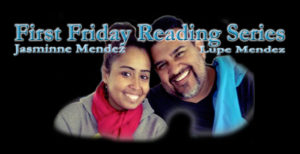 Inprint is proud to serve as a host for the First Friday Poetry Reading Series. The First Friday Series is the oldest poetry series in Houston and has been held monthly on the first Friday of each month since 1975. The series is coordinated by Robert Clark, not by Inprint. Each reading begins with a featured poet, followed by an open mic. On May 6, First Friday presents Jasminne Mendez and Lupe Mendez.

Jasminne Mendez is a performance poet, actress, teacher and published writer. She captivates audiences through the passion and energy of her words and voice. She has performed her poetry in venues all around Houston, including the MFAH, Rice and the Alley Theatre. Mendez has been published both nationally and internationally and her first multi-genre memoir Island of Dreams was published by Floricanto Press in November 2013.

Lupe Mendez is a poet/educator who works with Nuestra Palabra: Latino Writers Having Their Say and Word Around Town Poetry to establish poetry events and writing workshops. Lupe’s recent work is now part of Norton’s newest anthology Sudden Fiction Latino: Short-Short Stories From The United States and Latin America, the 25th anniversary edition of The Bayou Review (University of Houston-Downtown) and Flash (University of Chester, England)–the international forum for flash fiction. Lupe is a founding organizer of the Librotraficante Movement, a nationally known performance poet and sought-after keynote speaker at colleges and universities, as well as an editor in various capacities, including having been fiction and poetry editor of Drunken Boat.