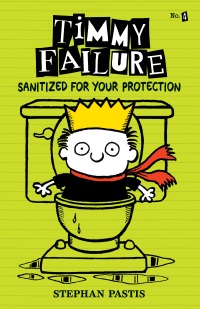 Inprint invites you to enjoy an afternoon with bestselling author and syndicated cartoonist Stephan Pastis. Mr. Pastis will share his fourth book in the popular Timmy Failure series, Timmy Failure: Sanitized For Your Protection, for ages 8 -12. After his presentation, he will take questions from the audience, followed by a book sale and signing*, giving fans a chance to visit with him. Books will be available for sale at the event through Blue Willow Bookshop.

Pastis’ first book in the series, Timmy Failure: Mistakes Were Made, was published in 2013 and debuted at #4 on The New York Times Middle Grade Best Seller list. The book spent more than 25 weeks on the list and was also #1 on the American Booksellers Association Indie Next List.  Following the adventures (or misadventures) of an inept kid detective and his polar bear sidekick, The Sunday Times of London says, “This ironic, knowing, inspired book will prompt constant laughter,” and author Jeff Kinney declares, “Timmy Failure is a winner!” In 2014, two more books were released, Timmy Failure: Now Look What You’ve Done and Timmy Failure: We Meet Again, both receiving wide acclaim.

For more information on Stephan Pastis and the Timmy Failure books click here.

Sign up below to enter a drawing for a free book or poster signed by Stephan Pastis.