JLF at Houston is produced by Teamwork Arts, in partnership with Inprint, Asia Society Texas Center, and the Consulate General of India 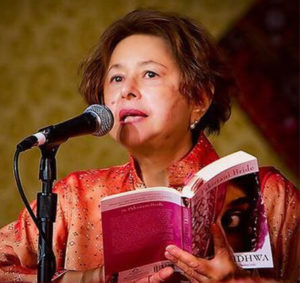 Teamwork Arts, producers of the ZEE Jaipur Literature Festival, brings to Houston an iconic event where ideas and perspectives jostle with intellectual vigor. Enjoy a two-day festival with internationally acclaimed authors and thinkers engaging in a range of provocative panels and debates alongside Houston’s best local writers on the thoughts and issues that resonate with our time. The Friday portion of the tw0-day festival includes the following. For details on the Saturday portion of the festival click here.

Houston resident Bapsi Sidhwa is an American-Pakistani writer of Parsi descent. The author of five acclaimed novels, she is also known for her collaborative work with Indo-Canadian filmmaker Deepa Mehta, whose film Earth was based on Sidhwa’s acclaimed novel The Ice Candy Man.

Sidhwa will deliver her keynote address where she speaks of her journey with words, across cultures, and continents.

About the Zee Jaipur Literature Festival: Described as the ‘greatest literary show on Earth’, the ZEE Jaipur Literature Festival is a sumptuous feast of ideas. The past decade has seen it transform into a global literary phenomenon having hosted nearly 2000 speakers and welcoming over a million book lovers from across India and the globe. Writers and Festival Directors Namita Gokhale and William Dalrymple alongside producers Teamwork Arts invite speakers to take part in the five-day program set against the backdrop of Rajasthan’s stunning cultural heritage and the Diggi Palace in the state capital Jaipur.

About Asia Society Texas Center: With 13 locations throughout the world, Asia Society is the leading educational organization promoting mutual understanding and strengthening partnerships among the peoples, leaders, and institutions of Asia and the West. Asia Society Texas Center executes the global mission with a local focus, enriching and engaging the vast diversity of Houston through innovative, relevant programs in arts and culture, business and policy, education, and community outreach.