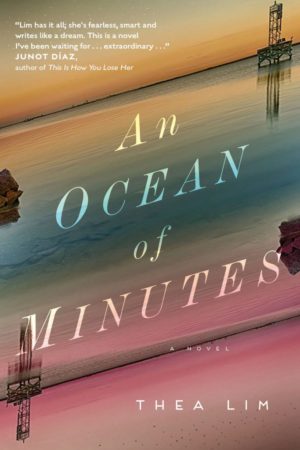 Reading followed by a conversation with Houston writer and former Inprint Fellow Jessica Wilbanks. For more information and to order a copy of An Ocean of Minutes click here.

Thea Lim is a former Inprint MD Anderson Foundation Fellow and the recipient of an Inprint Donald Barthelme Prize in Nonfiction. Her writing has been published by the Southampton Review, GRIST, the Guardian, Salon, the Millions, Bitch Magazine, Utne Reader and others, and she has received multiple awards and fellowships for her work, including artists’ grants from the Canada Council for the Arts and the Ontario Arts Council. Her novella The Same Woman was released by Invisible Publishing in 2007. She holds an MFA from the University of Houston Creative Writing Program and she previously served as nonfiction editor at Gulf Coast: A Journal of Literature and Fine Arts. She grew up in Singapore and lives in Toronto, where she teaches creative writing.B

She comes to Houston to share her new novel An Ocean of Minutes, published Quercus/Hachette in the UK, Viking/Penguin in Canada, and Touchstone Books/Simon & Schuster in the US. In the vein of The Time Traveler’s Wife and Station Eleven, the novel is a sweeping literary love story about two people who are at once mere weeks and many years apart. Kirkus Reviews calls it “a beautiful debut exploring how time, love, and sacrifice are never what they seem to be.” Mat Johnson says the book is “a time machine into the future of this moment. Gripping and graceful, it’s dystopian love story as told by a visionary. Thea Lim’s novel reads like the birth of a legend.”